“And, for fuck’s sack, stop using normal as code for white,” I snap. “Your life isn’t the ruler that the rest of the world gets measured against.”
― Lily Anderson, Undead Girl Gang 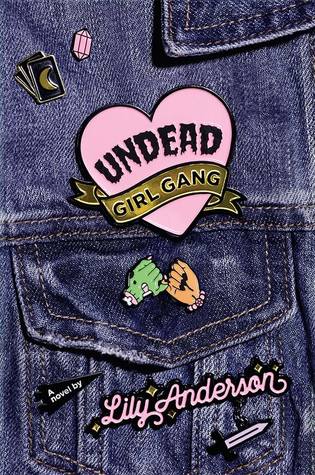 Mila Flores and her best friend Riley have always been inseparable. There’s not much excitement in their small town of Cross Creek, so Mila and Riley make their own fun, devoting most of their time to Riley’s favorite activity: amateur witchcraft.

So when Riley and two Fairmont Academy mean girls die under suspicious circumstances, Mila refuses to believe everyone’s explanation that her BFF was involved in a suicide pact. Instead, armed with a tube of lip gloss and an ancient grimoire, Mila does the unthinkable to uncover the truth: she brings the girls back to life.

Unfortunately, Riley, June, and Dayton have no recollection of their murders, but they do have unfinished business to attend to. Now, with only seven days until the spell wears off and the girls return to their graves, Mila must wrangle the distracted group of undead teens and work fast to discover their murderer…before the killer strikes again.

Back in December of 2017 I completed a post about the top 10 books I hoped Santa would bring me. On that post I spoke about some of my most anticipated reads for the upcoming year. One of those books was Undead Girl Gang by Lilly Anderson. It was touted as “Heathers” meets “The Craft” if you know me then you know that that is irresistible to me. They are two of my favorite films, some of the films I loved the most during my formidable years, and some of my biggest style inspirations. So, I couldn’t wait to get my hands on this book.

This book was strange in all of the best ways. That goes without saying after all it combines paranormal and magical elements into the real world. The combination wasn’t smooth. Which is part of what I loved about it. There’s something about the wrongness of the situation, the unbelievability of the situations, and absurd resolution that make me love this book. This book takes its cue from alternative films that lean into the ridiculous nature of the plot.

I also loved the element of Wicca in this book. I liked that the characters talking about it through most of the book weren’t clinical about it. They were teen girls that got involved with it because of what it represented to them. I could completely relate to those ideas. When I was younger I was in love with the world to Wicca and magic. I begged my mom for numerous spell books and Wiccan handbooks along with a full tarot set. I had no idea what I was doing but I loved the idea of the intention behind it.

The characters were fun in this book. Their humor made the book light and quick. I really felt connected to the main character Mila and even the rest of our undead girl gang. I also loved Mila’s attitude throughout this novel. She wasn’t ashamed of who she was. She had insecurities but she didn’t allow others to mess with her own image of herself. I loved that she was constantly reiterating that fat does not equal ugly and so people shouldn’t treat the word as though it does. It was nice to hear that from a main character. They were a lot of fun to read about. I do wish we saw a little bit more backgrounds and development from other characters I did like the relationships within this novel.

Overall, I really enjoyed this book. You can tell that Anderson didn’t overthink it or take it too seriously. She knew she was writing about a “strange” subject and she let that be okay. I really appreciated that with this novel. I can’t wait to see what she comes out with next.

What other paranormal books would you recommend?

What are you looking for?